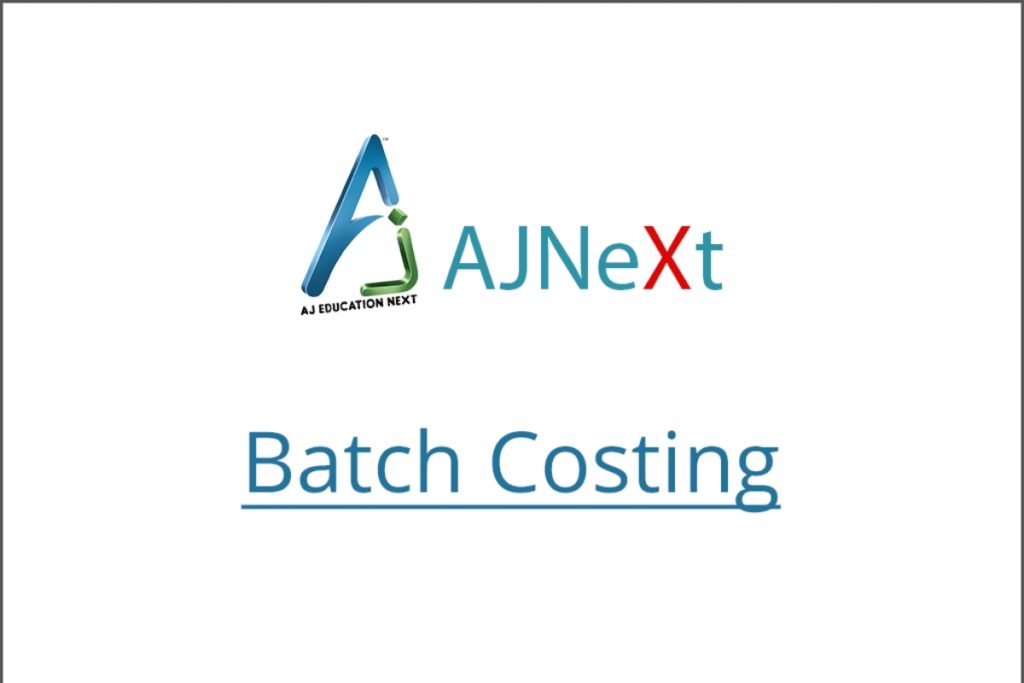 Batch costing means accounting and calculating costs in respect of each batch instead of accounting it for each and every unit. Batch means a number of things or people which belong together as a group. Example of batch refers to group of students being thought together in school, colleges and educational institutions at a time. It may also refer to hundreds or thousands of products manufactured together at one time. The purpose of doing so is to reduce time, money and energy and pass on these savings to the ultimate customer. Ever imagined if you were the only student to be thought in the entire class your fees would be so high that education itself would be a day dream for most of us. Thus teaching was conducted for many number of students together called as class or grades. Same is the case with manufacturing companies when it comes to production.

Batch costing is a type of specific order costing where articles are manufactured in predetermined lots known as batch. Here each batch is treated as a separate cost unit and cost are accumulated and ascertained for each batch. A batch consists of number of units which are processed simultaneously. Under this method inputs are accumulated in the assembly line till it reaches minimum batch size. Soon after the batch size is reached the production takes place. Cost of each component in the batch is determined by dividing the total cost by the number of articles produced.

1.Batch costing is applied where identical units are produced.
2.All costs are accumulated and ascertained for each batch
3.A separate batch cost sheet is used for each batch and is assigned a certain number through which the batch can be identified.
4.On completion of production the cost per batch is determined as follows :
COST PER UNIT = TOTAL BATCH COST / Total Units in Batch
5.Products loose their individuality as they are manufactured in continuous flow.

1. Batch costing is used to calculate total cost of each batch.
2. Here all raw materials are supplied on batch basis and other expenses are also paid on the basis of each batch.
3. For instance if we deal in we talk about nestle company manufacturing maggi noodles it will never produce 100 gram of noodles and than pack it and then again produce. In reality, they might produce 10000 kgs or even 100000 kgs and than pack it in packets of 100 gram for selling purpose.
4. Batch costing is generally applied in manufacturing industry making readymade garments, toy manufacturing industries, tyre and tubes manufacturing companies, pharmaceutical industry, etc.
5. To initiate production process, an entity has to incur expenditures on engaging workers and setting up of machines to run for production.

Now the most important point that comes up here is how many units are to be produced in a batch? Frankly answer to this depends upon the demand and supply of the required product, production facilities of the company and various other factors that are necessary for smooth functioning such as availability of the raw materials or labor and sometimes the government regulations majorly applicable to tobacco manufacturing companies in a manner that they cannot produce more than specified number of products in a certain period. Assuming every above factor is in favor of the company, still the question that how many units should be produced in a batch is decided by the concept of Economic Batch Quantity(EBQ)

This theory is in similar lines with that of the theory on Economic Order Quantity (EOQ). Here EBQ refers to the optimum batch size which the company should manufacture so that the set up cost and the carrying costs in relation to finished goods is optimum (lowest).

Set up costs are incurred before the production starts. These consists of indirect material cost, labour cost of worker or engineer setting up the machine, overheads of the service department charged to the respective batch such as overheads of Boiler House Department and other indirect expenses. The nature of expense is such that they are incurred for each and every batch produced. Larger the batch size lower would be the set up costs and vice versa. The other cost being carrying cost incurred for carrying or holding inventory which majorly consists of interest cost. Larger the batch size higher the carrying costs and vice versa. Both these costs are of conflicting nature. Therefore a trade – off between set up costs and carrying costs is achieved with the help of EBQ. This relationship is explained with the help of following diagram